I was recently contracted to develop a user interface, or “dashboard”, for over 5,000 USB flash drives to be distributed straight after the Orange RockCorps event at the Royal Albert Hall in London.

I programmed thousands of lines of object oriented class-based code which generated an immersive 3D interface for the user (see above).

This was entirely data-driven from XML so that the right video files could be loaded. The system had to be simple to configure, as it needed to be deployed within a matter of minutes after the concert ended.

On the night, the deployment of the interface was a complete success and I was highly commended by Aderra and by KLP Euro RSCG, with whom I worked on the project, Aderra saying this was by far the best dashboard for their product that they had so far seen. 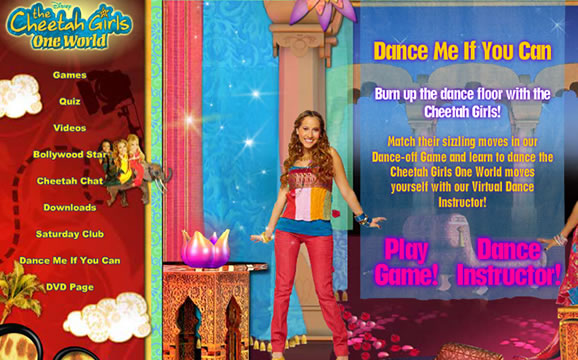 I was recently employed by major London agency Ogilvy Action to assist in the creation of a game for Disney’s popular Cheetah Girls site.

The idea was for the player to hit the right keys on their keyboard to match the moves of a dancer on-screen. Of course, the action became faster and faster!

Working at the beginning of the project, my responsibility was to define the over-all structure of the Dance Me if You Can game and, technically, to create a countdown timer which adhered strictly to the MVC design pattern.

A dancer then came in and the moves for the game were all recorded in front of a green screen.

I was only commissioned to carry out the initial mapping and MVC programming for this job. I then handed it over to another more junior developer who implemented the rest of the development.

I was alerted when the game was completed and uploaded. I’m told it was a big hit with the under-15s!

On this site I post tips, tutorials, examples of my work and music that I like. You're the 1,152,835th visitor so far!

Music made by me